He’s living the life of an artist 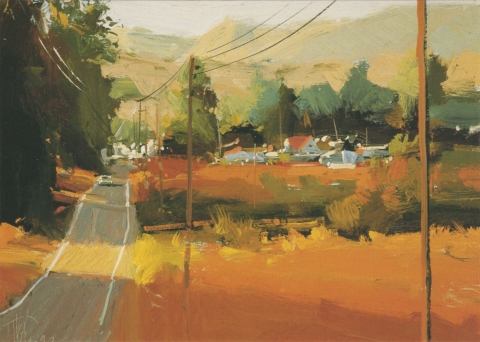 JUST ONE SHORT year ago, Ken Auster’s fans were carrying surfboards. But then the renowned surf artist decided to shift his focus to plein-air landscapes. Now he has new fans who are more likely to be found in museums.

Auster spent nearly all of the last year painting and exhibiting his landscapes, and the result has been nothing less than astonishing. He has won major prizes in several of the top landscape painting exhibitions. And he was invited by the prestigious Plein-Air Painters of America to join in a week of open-air painting on Catalina Island last July.

From January 17 to February 28, his new work will be exhibited at the Thomas Reynolds Gallery in San Francisco. The exhibition continues a productive partnership that began a year ago when Reynolds hosted Ken Auster’s first gallery show in January 1997 – a show in which every painting sold. Auster’s latest work comes primarily from a painting trip down the coast of Northern California last fall.

“I’m living the life of an artist — traveling and painting,” says Auster. “That’s the top block in the pyramid. You can’t ask for anything better.”

Auster says his work now is evenly split between location and studio painting. “I paint in the studio only after I’ve got a running start on location,” he says. “That helps me keep the honesty and the looseness from outside, and to carry over the feeling of immediacy.”

You are currently reading He’s living the life of an artist at Art Matters.