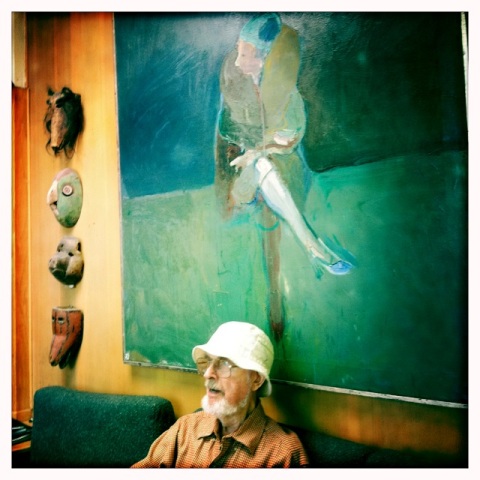 Charles Campbell stands in his small Potrero Hill living room looking up at a painting. It has been in the house for years, one of dozens he believed in, bought or traded for, and held onto. The walls around him are clamorous with paintings, most of them by artists who became famous partly through Charlie’s efforts. There are Diebenkorns, Oliveiras, Wonners, Weekses and Thiebauds. Each one has deep personal associations. They’re all old friends, guests at his party.

This one he has just moved from another wall and been installed over the fireplace, where he can have a long last conversation with it. For it is about to leave. He has just sold it to a Silicon Valley entrepreneur for close to $2 million dollars. Charlie stands before it like a father before a son he is about to send off into the world: appraisingly but proud.

A San Francisco art dealer for six decades, Charlie asks me not to divulge the name of the painting, its price or its buyer. Discretion is an essential condition of dealing with wealth. But right now Charlie is clearly bragging. He poses, bird-like, hawk-nosed, chin up, gray sweat pants all but falling off his rail-thin hips, and it is a posture of triumph as if to say: “I wasn’t given a lot of advantages, but how do you like me now, world?” And then, his gaze shuffles behind his thick eyeglasses, his chin lowers and something softens in him and you see he is sad at parting with an old friend.

Charlie doesn’t look much like a gallery man. He doesn’t seem to calculate your social standing or your net worth as you walk in his door. He hasn’t got a day of academic training, has never taken a college art history course. No ascot, no fancy suit, no monocle. If you entered his gallery, he would not stand over your shoulder lecturing about the artist or the painting or how the painting’s value is expected to grow. “I always felt, look, I’ll put up what I think is the best stuff and you come and look at it and make your own decision,” he told interviewer Joan Bossart. It’s up to the people who come into his gallery to decide what the paintings are about.

There is a common man quality to him. His close friend Wayne Thiebaud calls him “the accidental dealer.” Unlike most of his gallery competitors, he backed into the business, with no preconceived idea of the nobility of art or its patrons. And one gets the impression that he did it not for beauty or wealth or social standing, but because he has always taken pleasure in sharing the enjoyment he gets out of life.

— excerpted from The Accidental Dealer by Peter Steinhart, copyright 2011.

§ 2 Responses to The accidental dealer

You are currently reading The accidental dealer at Art Matters.