The art of Tibetan rugs

A rare Tibetan leopard spots rug from the Piccus Collection

Before they returned to San Francisco in 2000, Pacific Heights residents Robert and Alice Piccus lived in Hong Kong for three decades. Both were inveterate travelers and knowledgeable collectors who had the interest and proximity to seek out Vietnamese ceramics, Southeast Asian sculpture and Tibetan silver, among other treasures. They also built an important collection of traditional Chinese furniture.

In the mid-1980s they became interested in Tibetan rugs, which were beginning to appear in Hong Kong. During the next decade they assembled a notable collection of almost 200 Tibetan rugs, now celebrated in a lavish new book, Sacred & Secular: The Piccus Collection of Tibetan Rugs, published by Serindia Publications in Chicago.

How did you begin your collection? Alice and I had the good fortune to live in Hong Kong from 1968 to 2000, a 32-year period that saw Hong Kong grow from a relatively sleepy colonial backwater to its present status as the dynamic business, financial and art-collecting center of Asia.

The Asian art that surrounded us in Hong Kong and that we found during our extensive travels throughout the region led us to collect in a number of areas. During the 1970s and early 1980s we collected early Chinese rugs made for use in temples in the Tibetan religious and cultural areas of western China and Mongolia. But the Tibetan rugs available then were never of interest to us, and we assumed that would always be the case.

So what changed? Westerners were not able to visit Tibet until the mid-1980s, but some Hong Kong Chinese dealers did, and so did certain Tibetans living in Nepal. Some of the leading Katmandu dealers were accumulating huge piles of rugs. The condition of these seemingly never-washed rugs was horrible. It was clear that Tibetans did not put much care into their rugs, which in the absence of furniture and fixed accommodations were functional objects on which to sit, sleep and give some protection from the cold. The mid-1980s became a dynamic time for collecting Tibetan art, including the previously ignored rugs. We were concentrating on putting together our collection of classical Chinese furniture while continuing our interest in Chinese rugs and Tibetan silver and manuscript covers. We were aware of developments in Tibet, and we began to pay attention to the Tibetan rug market.

What is special about Tibetan rugs? Tibetan rugs are made for a variety of uses: monastic, domestic and for transportation. Monastic uses include long narrow runners, often designed with individual squares to indicate seating for each monk. Sitting rugs, usually about three-feet square, were placed on platforms or elevated thrones for high-ranking monks. Rugs are also made for decorative purposes in monasteries. Domestic use includes rugs for seating and sleeping. Floor coverings are extremely rare. Uses having to do with transportation include saddle sets as well as blankets and other accessories for horses, mules and yaks.

Why were these rugs so little known in the rest of the world? Tibet had been isolated until 1904, when the British rather forcibly opened the country to visits and trade, mainly with India. That brought a gradual end to hundreds of years of almost total isolation.

The importance of horses in Tibetan life led to the creation of saddle rugs.

The establishment of the Peoples Republic of China in 1949 effectively put an end to Tibetan independence. Increasing political pressure on the young 14th Dalai Lama, together with the Chinese military invasion in 1959, led to his fleeing to India along with thousands of followers. When the Chinese army invaded, Tibet reportedly had more than 6,000 temples and monasteries. After the Cultural Revolution, from 1966 to 1976, some 95 percent of all temples and monasteries had been destroyed. Art works were shipped to China to be sold by Chinese government trading companies to overseas antique dealers for valuable foreign exchange. Art treasures hidden away and saved from confiscation and destruction eventually found their way out of Tibet as thousands of Tibetans went to India and Nepal. These objects, both sold by the Chinese and smuggled out by refugees, formed the basis of the international collecting of Tibetan art.

By the mid-1980s, the Chinese authorities, needing foreign exchange, felt secure enough in their control of Tibet to allow carefully controlled tourism. As an unintended consequence, Tibet’s borders became a veritable sieve as all manner of art began leaving the country, officially or otherwise. Among the Tibetan rugs that began to appear were previously little-recorded types from earlier eras.

When did you take the plunge and start to collect? In 1987 Stephen McGuiness, later a leading dealer in Tibetan rugs and textiles, moved from Katmandu to Hong Kong and established the Plum Blossom Gallery. We bought our first Tibetan rugs from Plum Blossoms in March 1988, starting what was to become a long friendship and business relationship. 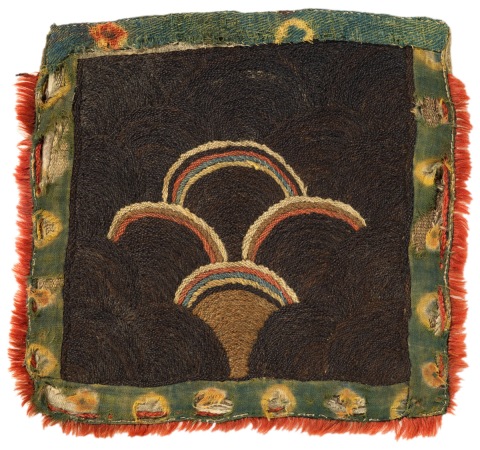 An extraordinarily rare Tibetan nomadic rug from the 19th century.

As with our other collecting interests, we tried to blend our passion for the objects with knowledge of the subject. This included reading as much of the literature as possible and meeting many scholars, dealers and collectors who shared our interests. In Hong Kong — where collecting was more than a pastime and qualified as a passion — this kind of commitment was possible. In Katmandu, it was fun just to hang out with the extraordinary cast of characters who dominated the field.

Was there a particular focus to your collecting? I have concentrated on the pre-1900 period when designs were still traditional. Like many collectors, I am partial to certain design elements, which include abstract tiger stripes, dragons, medallions, geometric shapes, textile patterns and unusual nomadic weavings. I have concentrated on rugs that reflect the cultural background and historical traditions of the weavers and not on designs woven to meet commercial demand. As much as possible, I have tried to avoid chemical colors. Aside from these conditions, I usually ended up buying what I liked.

You were in the right place at the right time. Yes. Experienced collectors know they rarely have such a window of opportunity to discover and explore a new field of collecting. Alice and I seized the opportunity and collected these early rugs during that exciting period. Dealers came to Hong Kong from Katmandu and Lhasa, bringing with them previously unknown designs and types, feeding the excitement of the chase virtually every month. It was this remarkable decade-long adventure in collecting that resulted in our Tibetan rug collection.

Robert and Alice Piccus were in the right place at the right time.

In the 1990s the collecting scene in Hong Kong grew and became even more exciting. It seemed that every month dealers appeared with fresh material from Tibet, often including designs never before seen. Visits to Tibet were quite stimulating, and rugs were to be found in the Berkhour bazaar that circled the Jokhang Temple in old Lhasa, but it was so dark in those shops it was hard to see what was being offered. While it was enjoyable to go to the source, in my experience it has been better to buy through trusted dealers who found and could vet the material.

Yet barely a decade later, your interest waned. By the late 1990s, the supply of good rugs was beginning to decrease and the market was becoming quiet. Alice and I were finding fewer interesting rugs with each passing month. By 1998 our collection was essentially complete, and we have added relatively few pieces since then. The 10 years from 1988 to 1998 were a unique window of opportunity for collecting Tibetan rugs.

For us, there has been great pleasure in all these collecting activities, not the least of which has been the friends we made in each case. We have always felt collecting to be a deeply social exercise, and the dealers, scholars and fellow collectors became and remain our close friends.

§ One Response to The art of Tibetan rugs

You are currently reading The art of Tibetan rugs at Art Matters.