Warming up a special place 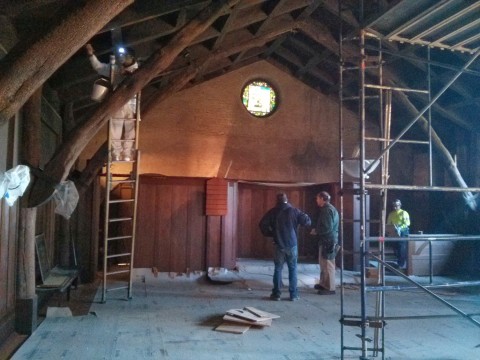 MOST RENOVATIONS and facelifts aim to make things look a little younger and fresher. But that was not the case with the work just completed at the historic Swedenborgian Church at Washington and Lyon streets in San Francisco.

On February 16, the congregants entered through the garden and past a crackling fire in the massive fireplace, just as they always have, as they returned to their sanctuary after the first major renovation in the church’s 119-year history.

“It’s so toasty in here,” said office manager Dana Owens, who supervised the project. The fireplace was the primary source of heat until radiant heating was added during the renovation underneath the refinished wooden floorboards. Discreet lighting was tucked into the madrone trees and rafters that support the roof. The stained glass windows were restored and the thick, rounded wooden doors were refinished.

The Swedenborgian Church, built in 1894, is the birthplace of the Arts & Crafts movement in the United States. Its simple handmade maple chairs with tule rush seats were the inspiration for all Mission-style furniture that followed.

On March 16, the Swedenborgians will launch a monthly lecture series on the art and architecture of the unusual church, which is a National Historic Landmark.

Reinstalling the stained glass dove window above the altar

You are currently reading Warming up a special place at Art Matters.