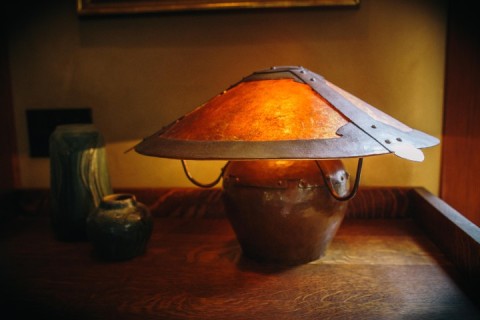 Audel Davis and his wife, Lynne, live in a home tucked down a shady street off University Avenue in Berkeley. Apart from a few pesky crows that terrorize their coi fish by day, they have created a lush and quiet sanctuary, greatly influenced by the philosophy and aesthetics of the Arts and Crafts movement — a concept that took flight and reached its peak in the 1890s as a reaction to the age of mass production. It emphasized traditional craftsmanship as a way to put integrity and skill back into the design and manufacturing process.

Davis is a Bay Area coppersmith, widely known for his Arts and Crafts style lamps that have his own added twist.

You are currently reading Continuing the Arts & Crafts tradition at Art Matters.