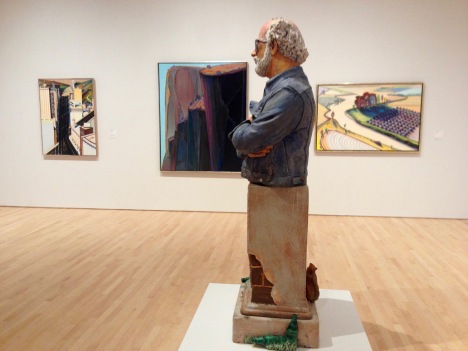 In the inaugural Art of Northern California exhibition, three Thiebauds and an Arneson.

SO WHAT ABOUT San Francisco’s extravagant new Museum of Modern Art? Well, it’s big, that’s for sure. And there is much to recommend:

• Photography gets respect. There are hundreds of photographs in dozens of galleries — almost the entire third floor and more. The “California and the West” exhibition is terrific.

• The highlights of the permanent collection — Matisse! Rivera! — still have pride of place in the still-grand second floor galleries.

•  Unlike much of the Fisher Collection, which will appeal to some more than others, the Calder sculptures are a delight, especially in front of the living wall.

Mostly the new building works. It is a huge cruise ship beached between the Mario Botta building (a relic from all the way back in 1995) and Timothy Pflueger’s magnificent Art Deco backdrop from the 1920s. But it is functional — and it has beautiful wooden stairs and windows framing views of the city.

Two complaints about the architecture:

• Botta’s beautiful entry has been eviscerated and replaced by a vast empty space with the kind of lean-to staircase that might take you over the dunes onto the beach. A crime.

• And the magisterial enfilade of galleries marching across the front of the second floor has been blocked off to create separate spaces, presumably. Surely this is not permanent.

Go and visit. There are much worse things than another new museum in town.

You are currently reading What about SFMOMA? at Art Matters.