She was a lot of fun 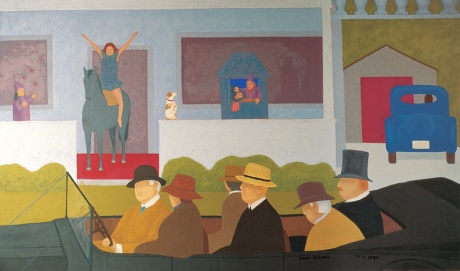 With her right hand she painted as Marion Seawell. With her left hand she wrote as M.C. Wells. In both her right-handed paintings and her left-handed writings, she spent a lifetime exploring the quirks and contradictions of her dual personalities.

That lifetime came to an end on April 7, 2017, when Marion Seawell died at age 88 in Mill Valley, California, after a fall and a short hospitalization.

She led an interesting life, as she acknowledged in the dedication of a monograph of her work, published in 2008 on her 80th birthday: “To all the dear friends, young and old, past and present, who have helped make my journey through life such an interesting adventure.” The book was titled This Has Certainly Been a Lot of Fun.

In the book, as in her life and art, she told a rigorously honest personal story. 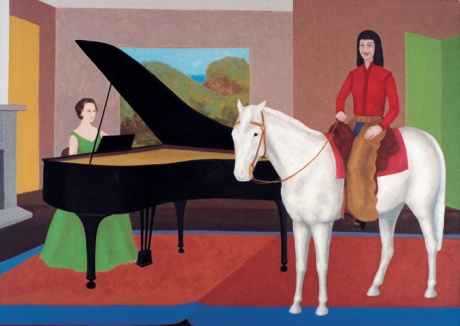 The Performers, from 1986, was the featured painting at an exhibition of her work at the William Sawyer Gallery in San Francisco. She wrote of it: “Here are my two personalities in their dream performances. One always wished she could be a lovely lady and a gifted pianist. The other showoff longed to be a fabulous nightclub singer riding a trick horse.”

Her mother played a significant role in her paintings. The family lived in Yakima, Washington, during her childhood. Of Yakima Auto Repair, from 1990, she wrote: “Luckily, my second personality has a healthy sense of self-esteem. In real life, she is the part that told my other half the cause of many problems. In this painting, she is the mechanic and the auto represents the rest of me. The dog symbolizes my mother getting into the back seat, rather than driving the car.”

While her paintings are lush with rich color and filled with stories and symbolism, it was one of her drawings, Pyramid of Cats, from 1961, that became her best-known work and her biggest commercial success.

“Two good friends who admired my drawing of a pyramid of cats suggested I go into the poster business,” she wrote. “One financed the production; the other and I split the cost of a small ad in The New Yorker. We immediately received 3,000 orders. The San Diego Zoo gift shop became a steady customer.” It led her to publish several other drawings as posters, including The Chicken Poster from 1974, The Last Egg from 1977, The Whale Poster from 1978 and Yin/Yang Cats from 1983. Decades later, Pyramid of Cats continues to be in demand. 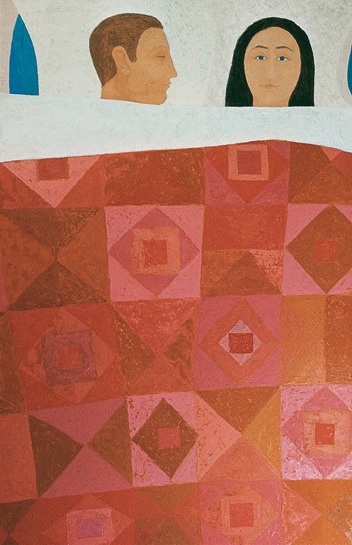 Late in her life, after she had moved to The Redwoods, a retirement home in Mill Valley, Pomegranate Press came calling about publishing some of her work. In 2012 Pomegranate created a series of notecards, including The Bed, her 1961 painting. She included the painting in the monograph of her work, writing: “A few months after this photograph was taken, I closed the woman’s eyes with a few strokes of paint. I’m glad she got to sleep at last.”

EARLIER: “A journey of self-discovery“

§ 2 Responses to She was a lot of fun

You are currently reading She was a lot of fun at Art Matters.