My first brush with art

SARAH SEGREST TAUGHT 7th grade English and Holmes County French. She was the first touch of culture that came into my young life as a country kid growing up in the backwoods, and my first brush with art.

At the rear of her room she had a display space for her flower arrangements, usually featuring camellias in the winter from her garden. She was an artist, and an ever-changing show of her paintings lined the walls. Plus, she had an air conditioner when no one else did — no small attraction in our farm town in the heart and the heat of the Florida Panhandle.

Mrs. Segrest was just the right combination of nurturing and challenging for 7th graders, no longer in elementary school but not quite teenagers yet. When I got to 9th grade and had her again for French class, her elevated aesthetic sensibilities became ever more obvious. French! With a southern accent.

By the time I had graduated a few times and had an opportunity to try out my French in France, I had also moved to Chicago, far from home. As I got more interested in art, I wanted something real to go along with my posters. I thought of Mrs. Segrest, and wrote her a letter asking if I could visit on my next trip back home and possibly acquire one of her paintings.

And so I did. She and Dr. Segrest lived in a secluded 10-acre woodland just south of town that was thick with hundreds of camellia bushes. Their home was filled with her paintings. I especially liked a still life of watermelons she had just finished.

It was my first original oil, and the subject matter made it a perfect way to remember her and home. I had also been attracted to a earlier painting of persimmons — especially after she said that another favorite teacher, Mrs. Gavin, who taught 10th grade biology, had brought her those persimmons. As I wrote the check and claimed my prize, Mrs. Segrest took the canvasboard with the persimmon painting on it and tucked it unnoticeably inside the back of the framed watermelon painting. “Dr. Segrest doesn’t like me to give them away,” she whispered.

Mrs. Segrest with one of her paintings.

A few years later, as the art bug was taking hold, I went to see Mrs. Segrest again on another trip back home and asked if I might buy my mother one of her paintings as a Christmas gift. She suggested an oval of roses. After mother died, I reclaimed it for myself — and now it reminds me of them both. 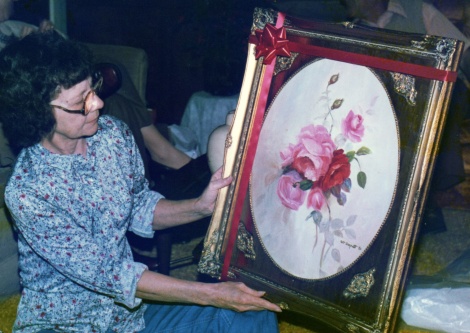 My mother with Sarah Segrest | Roses

§ One Response to My first brush with art

You are currently reading My first brush with art at Art Matters.