When Marion got married — almost

From remarks by Thomas Reynolds at a memorial on April 30, 2017.

I CAME TO KNOW Marion Seawell 25 years ago when I opened a gallery in San Francisco. One of the first people I met was her great friend — and later mine — the art historian William Whitney, who lived two blocks away.

In 2008, with Marion sometimes kicking and screaming, we published a book of her work, This Has Certainly Been a Lot of Fun — a truly remarkable and brutally honest statement by an artist. To celebrate its publication, we had a small exhibition of her paintings at my gallery, and she gave a talk.

We kept in touch as she was finding a mostly happy home for her final years at the Redwoods in Mill Valley. Sometimes she would call on Friday afternoons and laugh about the horns honking in the background. Her fellow seniors were holding their weekly antiwar protest outside. It was clear she had found the right home. END_OF_DOCUMENT_TOKEN_TO_BE_REPLACED

She was a lot of fun

With her right hand she painted as Marion Seawell. With her left hand she wrote as M.C. Wells. In both her right-handed paintings and her left-handed writings, she spent a lifetime exploring the quirks and contradictions of her dual personalities.

That lifetime came to an end on April 7, 2017, when Marion Seawell died at age 88 in Mill Valley, California, after a fall and a short hospitalization.

She led an interesting life, as she acknowledged in the dedication of a monograph of her work, published in 2008 on her 80th birthday: “To all the dear friends, young and old, past and present, who have helped make my journey through life such an interesting adventure.” The book was titled This Has Certainly Been a Lot of Fun.

In the book, as in her life and art, she told a rigorously honest personal story. END_OF_DOCUMENT_TOKEN_TO_BE_REPLACED

When I became an artist

When I was 19 years old, I was a waitress at Deetjen’s in Big Sur, California. A year later, I lived with the Fasset family, who built Nepenthe, and Lolly Fasset and I dug the clay and baked the adobe bricks that surround their magnificent terrace.

I was confident I was a superb artist, and I drew countless pictures of horses. One day I was trimming my long hair and asked a visitor from Los Angeles — an art teacher — if he would trim an inch off the back while I held my hand mirror. He was not shy about letting me know my carefully shaded pencil drawings of horses did not add up to much in the real world. He lifted up a long handful of my hair and — whack — cut it off at my neck. As I gaped in horror, he proceeded to cut off all of my long hair. Then he said I needed bangs and snipped some more. I was in a state of shock.

The blow to the self-esteem of my sensitive (left) side was devastating. From that moment on, I was transformed into a short-haired Bohemian. I wore togas, sandals and belts of yarn. I didn’t draw a horse for years — in fact, I did no artwork at all except for learning to weave wild things. That was when I really began to learn about art.

Searching for the Pyramid of Cats

I am looking for a print of Pyramid of Cats by Marion Seawell. I have found you through a strange set of circumstances. Stranger still is that this story may sound a bit familiar.

My grandfather had a print of Pyramid of Cats hanging in his home for as long as I can remember. He used to teach me how to draw those cats, and partially due to his influence I became an artist and gallery curator. When I think of my grandfather, this is the image I see. When he died, my uncle threw away most of grandpa’s stuff and the poster was lost. I was crushed, but at least my parents still had many of my grandfather’s things, so we still had some good sentimental family heirlooms.

However, I’ve never stopped looking for that poster. The only thing is, I had no idea who the artist was, what the title was, if it was an original drawing or a poster. Nothing. So no matter how I searched, I never found anything.

Fast forward 25+ years to this summer. My parents retired, packed up everything they owned and moved across the country. Only the moving truck never arrived. It was stolen, along with everything they owned. We were absolutely devastated — 70 years of collecting and memories gone. As I tried to help my parents pick up the pieces, I thought again of this poster.

So I went on Facebook and reached out to my cat lovers group and asked everyone if they could help me keep an eye out for it based on my foggy recollection of what it looked like 25+ years ago. Not only did someone find it within 10 minutes, but she found it in connection to an article written by one of your clients. Reading her story sounded so much like my situation it was a little strange; at one point I wondered if we had the same grandpa.

Her story was really inspiring and started out similar to mine. It also led me to you. So I wanted to reach out to you and see if you have one of these posters or know of someone who might be interested in selling.

My house is full; I have too much art; I need to downsize. And so, inspired by Marie Kondo’s bestseller, The Life-Changing Magic of Tidying Up, I began to dig around downstairs for art I could sell or donate.

I was looking for an old print I knew was around somewhere, but instead I found a wonderful cat poster I didn’t recognize. One cat was piled on the back of another, from a big lion on the bottom to a perky black house cat on the top. My husband and I are cat people, but we had no idea when or how we had acquired it. Perhaps it was from his mother, an amateur artist who loved cats, or maybe it came from a friend in a library where I worked in the 1970s. We obviously liked and saved it, but it was never framed and has no pinholes from being hung on the wall of our son’s room. What should I do with it?

It was signed Marion Seawell, 1971. Enter the Internet. I quickly found out that Marion Seawell is a California artist and that the Thomas Reynolds Gallery in San Francisco shows her work. So I emailed the gallery:

END_OF_DOCUMENT_TOKEN_TO_BE_REPLACED

A triptych of pets 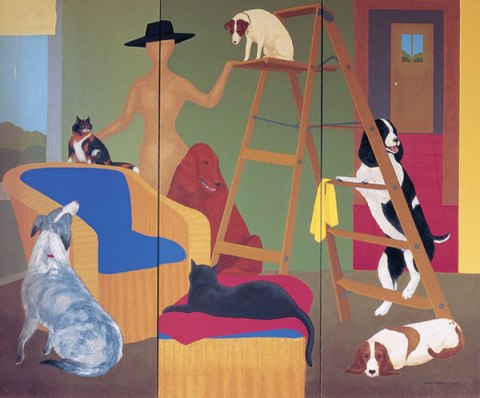 POMEGRANATE PRESS will publish Marion Seawell’s Pet Screen, a triptych, and three of her other paintings as notecards this fall. The Northern California painter — featured in a retrospective at the Thomas Reynolds Gallery in 2009 — is known for her psychologically charged autobiographical paintings of people and other animals. A catalog, This Has Certainly Been a Lot of Fun, is available.

She says of Pet Screen:

Gathered together here are different pets from different times and places in my life. Tim is atop the ladder, where he just climbed one day all by himself. He was my pet in Walla Walla, Washington, when I was in my early teens. That’s Rex wondering if he can climb up, too.

Down below is the first Tim from my early childhood in Yakima. Sam, the black cat who adopted me in San Francisco, is at the bottom of the central panel. Woodrow, the Australian sheepdog with a pink nose, is at left with a calico cat I did not know. That gorgeous black silk hat was my most elegant accessory ever. The brim could be turned up, down or sideways.

Jack, the big old fat brown dog in the middle, often came across the street to lie on our porch. The boy he loved had gone off to college. When my friend Mary and I walked to school to our seventh grade class, sometimes Jack would lumber along behind. He would wait by the school steps to follow us home. Once we tricked him and sneaked out a different door and skipped home. Just before dinnertime we felt guilty and went back to get him. There he was, so glad to see us. Dear old dog. His family kept him at home after that.

A journey of self-discovery

IN THE BACK PARLOR of a classic Victorian flat in San Francisco, there lived for many years a punctilious bookkeeper by day who by night was transformed into a Bohemian artist and writer.

This month her two selves come together with the release of a new book, This Has Certainly Been a Lot of Fun, which will be accompanied by a rare public showing of her paintings and drawings. END_OF_DOCUMENT_TOKEN_TO_BE_REPLACED

You are currently browsing the Seawell, Marion category at Art Matters.