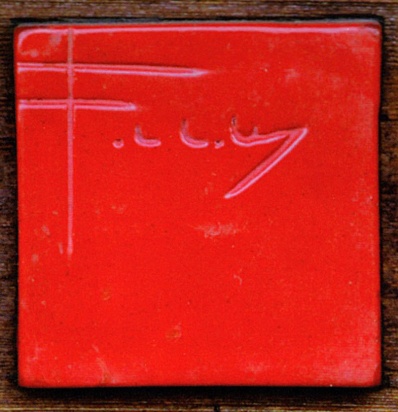 Green’s mother-in-law, Jeannette Pauson Haber, lived near him at 2510 Jackson Street, on Alta Plaza Park, with her sister, Rose Pauson, who was a former client of Wright’s. In 1940 she had built the Pauson House in Arizona, which was destroyed by fire in 1943.

Rose was a painter, and Jeannette a ceramicist. When Wright decided to create red tiles, inscribed with his initials, to be affixed to a select number of his buildings, he asked Jeannette to fabricate them. Wright provided a drawing of what he wanted; Jeannette formed the tiles; Aaron Green inscribed the initials — FLLW — into each one; and Jeannette produced the “Taliesin red” glazed surface that Wright specified.

Among the Bay Area buildings that Wright designated as worthy of bearing the tiles were the V.C. Morris shop on Maiden Lane — his only building in San Francisco and a precursor to the circular Guggenheim Museum in New York — and the Marin County Civic Center, which was completed by Aaron Green after Wright’s death.

IN 1939, after seeing his Hanna House at Stanford, Sidney and Louise Bazett retained legendary architect Frank Lloyd Wright to design a new house for them nearby in Hillsborough, south of San Francisco.

When construction began the next year, the Bazetts agreed to Wright’s request that one of his apprentices, Blaine Drake, come to the site during construction to supervise and make sure Wright’s intentions were being carried out — with the apprentice to be housed and fed by the Bazetts.

Even during construction, the house was already attracting attention, and another legendary architect stopped by to take a look. As the roofs were being finished, Blaine Drake reported to Wright: “Bernard Maybeck, the architect, was over to see the house — he was both puzzled and intrigued.”

One that got away 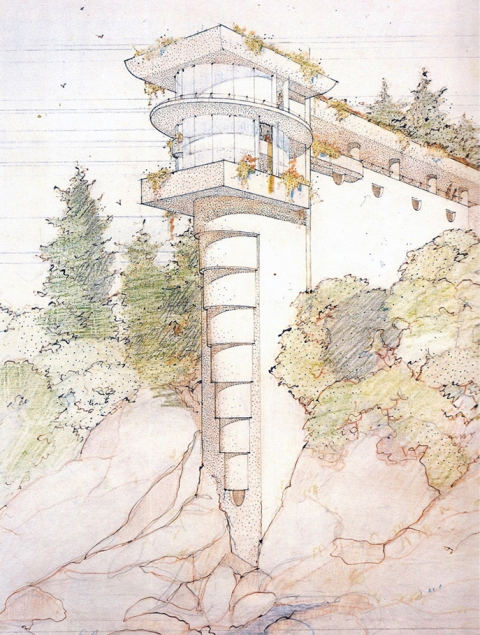 FRANK LLOYD WRIGHT designed no homes built in San Francisco — only the V.C. Morris Gift Shop on Maiden Lane, thought by some to be a warm-up for his circular design for the Guggenheim Museum in New York.

It turns out, however, that Wright also designed a home for the Morrises in Sea Cliff, overlooking the Golden Gate. It was never built. But drawings show what might have been. 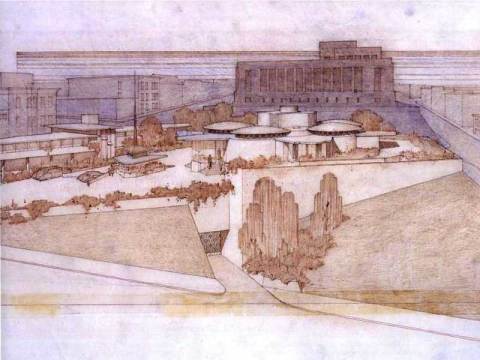 The mint and the mortuary — taxes and death — in San Francisco.

From an early age, Nicholas P. Daphne showed an interest in the funeral business.

Born in Greece in 1908, but raised in San Francisco, Daphne went to embalming school soon after graduating from Mission High School. He took apprenticeships at a few mortuaries around the city, and worked at the city coroner’s office. In 1938, he opened his first mortuary in the Mission.

During his early exposure to the business, Daphne was struck by how unnecessarily expensive — and gloomy — the funeral services tended to be. With his mortuaries, Daphne hoped to offer something different: funeral services that were not only “fair and low-priced,” as his wife would later describe them, but also, well, cheerful.

“I got the idea after we received so much comment from people in the last 10 years about the morbid atmosphere of most mortuaries,” Daphne told reporters at the time.

His next mortuary would be an attempt to fulfill that vision. First, he found a suitable plot of land — an area just west of San Francisco’s newly built U.S. Mint building, bounded by Church, Webster, Hermann and Duboce Streets. As Time Magazine described it at the time, the parcel was decidedly unremarkable: “His site was a rocky knoll off upper Market Street, its only building a battered shed decorated with an old election poster.”

But Daphne considered the location ideal — and deserving of an architect to match.

So some time in 1944, Daphne made a late-night phone call to 77-year-old, world-famous architect Frank Lloyd Wright.

You are currently browsing the Wright, Frank Lloyd category at Art Matters.