Tea with the Gettys

The original Temple of the Wings was designed by Bernard Maybeck.

GORDON AND ANN GETTY invite you to join them for tea at Temple of the Wings.

So said the invitation to my friend William Whitney, who traffics in upper-crust circles. Could I come along as his driver?

So off we went across the bridge to the Berkeley hills, to one of the great architect Bernard Maybeck’s creations, redone and outfitted to the nines – at least – by the heirs to the Getty oil fortune.

After an earlier outing to the Getty’s San Francisco double-mansion on Outer Broadway, William had scoffed that their approach to design was, “Don’t do. Overdo.”

This place was impressive. William was greeted as the Grand Pooh-bah of the Attingham Society, the group of aesthetes being received at the tea, who have toured and studied the great English country houses. William was an Attingham fellow back in the 1960s when he headed the California Historical Society. Among the alumni is the curator of the Getty Collection – yes, they have their own, responsible for the various treasures spread among their houses in the Bay Area. 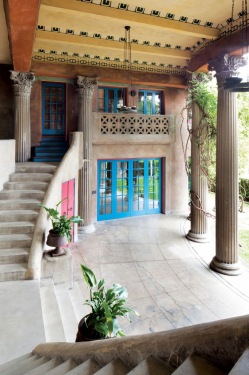 Temple of the Wings was designed by Maybeck at the turn of the century for a family of Berkeley eccentrics. They were dance enthusiasts, and their temple was built as something of a dance studio. It has a crescent spine of massive twin Corinthian columns and looks out over the bay directly through the Golden Gate. The family dressed in flowing robes, held dance pageants and ate peanuts, leading the neighbors to refer to their perch as Nut Hill.

The Gettys bought it in 1994 after a period of some decline. Ann Getty, just then emerging into her new role as a doyenne of design, set about collecting some exceptionally fine furnishings and artwork from the late 19th century British Arts & Crafts Movement – the perfect complement to Maybeck’s composition. Inside were excellent examples from all of the major figures, with textiles by William Morris, silver from Liberty of London and furniture by the Herter Brothers. Major paintings by Bougereau, Alma-Tadema and the Pre-Raphaelites hung on the walls. Upstairs were choice pieces from California’s Arts & Crafts elite, including, in the bathroom, a mahogany sconce by Greene & Greene.

My favorite single item was in the living room, on a side table, under a Tiffany lamp. There sat a framed family photograph. It was Grandpa: J. Paul Getty, sitting bolt upright on a severe high-backed sofa, surrounded by grandchildren, not a smile to be seen.

Someone asked whether anybody lived in the house. Oh yes, said the curator, Mrs. Getty has a sleepover here with her granddaughters every year.

MORE: “A paean to the Aesthetic Movement“

You are currently reading Tea with the Gettys at Art Matters.