Kim Frohsin at the Crocker 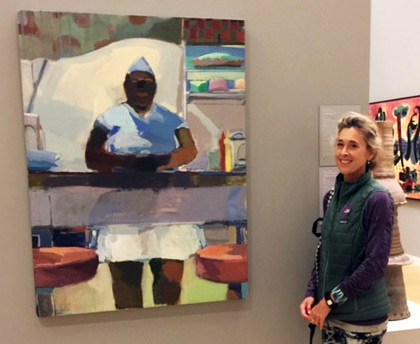 Kim Frohsin and “Grasshopper Pie” at the Crocker Museum.

ON A RECENT VISIT to the Crocker Museum in Sacramento, artist Kim Frohsin rounded the corner to visit the work of old friends from the Bay Area Figurative movement and found her own “Grasshopper Pie” from the 1993. It was in good company, with an Elmer Bischoff landscape and a Manuel Neri sculpture nearby.

“Since the early 1950s, when the Bay Area artists David Park, Elmer Bischoff, Richard Diebenkorn and others began to return to representational motifs, California artist have pursued abstract depictions of the human figure,” the label noted. “Few have done so with the consistency of Kim Frohsin, who finds fresh inspiration in figures both nude and clothed, indoors and out. Flat and patterned, Frohsin’s figures often seem to become one with their environment, such as this woman at a bakery counter.”

Neri, Bischoff and Frohsin at the Crocker Museum.

You are currently reading Kim Frohsin at the Crocker at Art Matters.