ON MARCH 2, 1903, the California Legislature declared the golden poppy the state flower, prompting its proliferation on objects of all kinds, including paintings. That Granville Redmond started painting poppies in earnest just as the legislature made the flower’s status official was surely not coincidental.

The golden poppy, Eschscholzia californica, provided a distinctive, seasonal burst of color, enlivening yellow-green hills and meadows following winter rains. The poppy was more than a flower, however. It was a symbol of California itself, its golden hue emblematic of the state’s history of mining, its importance as an orange grower, its perennial sunshine, and its amber hillsides in summer. It appealed to locals and tourists alike.

In Redmond’s day, great profusions of poppies thrived throughout the state, but were especially notable in the San Gabriel Valley, where Redmond often worked. In 1904, Redmond started to focus on poppies, and he became incredibly skilled at doing so. Soon no other artist in California could match his aptitude for painting the flower in its natural environment. Like his colleagues, Redmond would come to depict poppies and other wildflowers in combination, pairing them most frequently with lupine, which provided a perfect, blue-purple complement to the poppy’s orange-yellow hue.

In many of his paintings, Redmond maintained what he considered to be a self-respecting balance between color and quiet, with poppies animating landscapes that were subtly hued. The poppies and lupine nestled within the otherwise tonal expanse provide orchestrated bursts of seasonal color — often just enough to leave the viewer longing for more. Redmond himself remained personally inclined toward quieter paintings, preferring, as he told an art critic for the Los Angeles Times, to paint pictures of “solitude and silence.” And yet, he confessed: “Alas, people will not buy them. They all seem to want poppies.”

— Excerpted from Granville Redmond: The Eloquent Palette, by Scott Shields and Mildred Albronda.

MICHAEL REARDON’S painting Light and Shadow has been juried into the 100th international exhibition of the National Watercolor Society, to be presented online this fall from October 1 to December 20.

Reardon, one of the nation’s most respected watercolor painters, tells how it happened.

I had long been interested in doing a fire escape painting, mainly because of the beguiling shadow patterns. After several false starts over the years, last June I saw this fire escape outside Specs’, an old San Francisco dive and thought this could be the one. I did a sketch but put it aside because there was something wrong with the composition.

In April, I was rearranging my stack of “problem” sketches when a piece of paper covered the right side of the sketch and, voilá, the composition problem was solved.

A studio by the park

JOHN PAYNE had no desire to settle in California until he visited San Francisco. He immediately fell under the city’s charms and uniqueness.

There was no doubt that in the 1950s it was the place to be. Lawrence Ferlinghetti had just opened City Lights bookstore in North Beach, and the free-spirited culture of the Beat generation appealed to the young painter. The hills, the Victorian houses and the liberal politics were irresistible. Best of all, his allergies disappeared like magic in the gray fog.

END_OF_DOCUMENT_TOKEN_TO_BE_REPLACED

A new studio at Sea Ranch 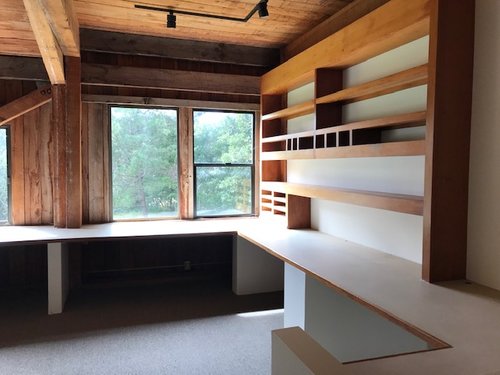 Says Sandy Ostrau: “The Northern California coast has always been an important inspiration for my work. Now I’ve leased a beautiful studio space on The Sea Ranch and plan to spend more time up there working. The surrounding coast will undoubtedly continue to influence my work.”

Wonner-Brown estate to the Crocker 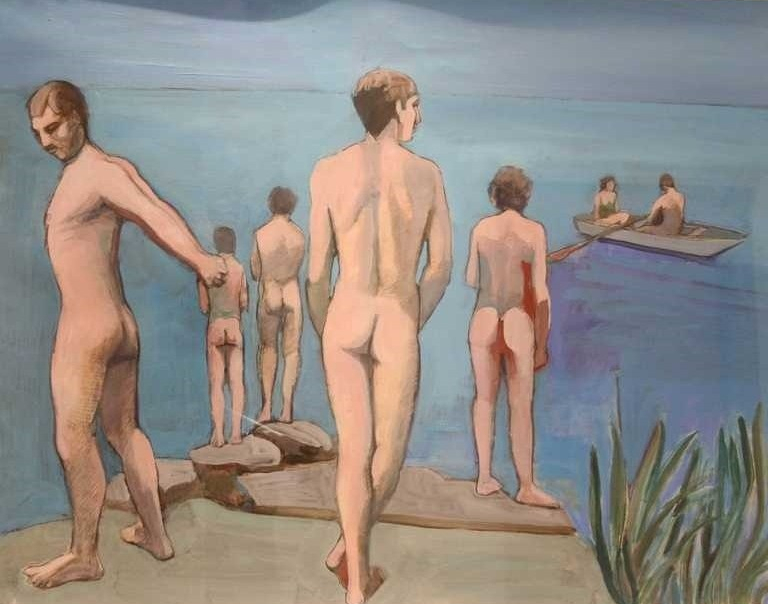 In accordance with the artists’ wishes, the fund will support museum projects relating to emerging artists or lesbian, gay, bisexual, transgender, queer, or questioning and intersex artists.

By 2023, the Crocker Art Museum will use the fund to mount an exhibition of the work of Wonner and Brown — the most comprehensive show of the artists’ body of work ever presented — and produce an accompanying catalogue.

“Paul Wonner and Bill Brown were trail blazers, both individually and as a couple,” said the museum’s associate director and chief curator, Scott A. Shields. “It is wonderful that their legacy will live on, not only through their own art, but though their forward-looking support of other artists. It is what they wanted, and everyone at the Crocker is honored to be able to realize their vision.”

Read more from the Crocker Museum

A life of art

He’d lived in the flat on California Street for 37 years. Suddenly late one afternoon Jim Scott realized something was wrong. He called 911 and tried to answer all the dispatcher’s questions. Finally he told her: “Look, I have to get out of here. My room is full of black smoke.”

Sparks from a welder working next door had started a fire. The squadrons of firefighters soon on the scene flooded the blaze before it reached Scott’s apartment — but only after they had bashed in his ceiling and windows, leaving his home a soggy and smoky mess.

In his book, The Al Tarik, Scott, now 96, gently unfolds the story of the three years that followed and landed him in a residential hotel on Sutter Street he describes as “a century-old San Francisco pile” that is “a refuge for those like myself who in their last years have been roughed up and tossed on the rocks and shoals.”

At first his landlord assured Scott he would be back in his apartment within a few months. He moved in temporarily with a neighbor across the alley. But as the renovation of the building languished, he needed another place to stay, and found no good options. So he moved back into his charred apartment.

“There was no heat or light, but the water was still running,” he writes. “It was much better than the Tenderloin cesspool I had fled. On my first night in what had been my old bedroom, I looked up through the blackened rafters to the shingles of the roof, which roared with a great downpour and thunder while lightning lit the plastic sheets stretched over the window spaces. Oddly, it all felt elemental and reassuring and that something positive could now happen.”

END_OF_DOCUMENT_TOKEN_TO_BE_REPLACED

Kim Frohsin at the Crocker

Kim Frohsin and “Grasshopper Pie” at the Crocker Museum.

ON A RECENT VISIT to the Crocker Museum in Sacramento, artist Kim Frohsin rounded the corner to visit the work of old friends from the Bay Area Figurative movement and found her own “Grasshopper Pie” from the 1993. It was in good company, with an Elmer Bischoff landscape and a Manuel Neri sculpture nearby.

“Since the early 1950s, when the Bay Area artists David Park, Elmer Bischoff, Richard Diebenkorn and others began to return to representational motifs, California artist have pursued abstract depictions of the human figure,” the label noted. “Few have done so with the consistency of Kim Frohsin, who finds fresh inspiration in figures both nude and clothed, indoors and out. Flat and patterned, Frohsin’s figures often seem to become one with their environment, such as this woman at a bakery counter.”

Neri, Bischoff and Frohsin at the Crocker Museum.

These four paintings on panel were created in succession during 1991, “my year of the ruler” — as in using the literal measuring tool to make marks or hold a brush load of paint against. That was my 30th year, near the beginning of my three-decade career in fine art.

I was then — as I have been in the decades since — exploring new subjects and new ways of making work. My exploration was informed by direct, concrete, personal life experience, and also by intuition, imagination and risk-taking.

These particular small works were borne during many months of making paintings on paper and panel that were as close to pure abstraction as I have ever come. In 1991, while walking in the hot Scottsdale, Arizona, sunshine, I made a simple linear drawing of a white tent. Then, back in San Francisco, this minimal drawing was the spark for a flood of work, over many months, which had as its core subject a house or tent shape. Numerous “architectonic” paintings evolved.

These four “scapes” were directly influenced by a 30th birthday gift from my grandmother: a trip to Turkey. These paintings in a muted palette, completed post-trip, stem from memories of our travels and things arid, ancient and beige.

The elements of earth, sky and water appear in these four, along with a sense of vastness and timelessness. They each are anchored by fictional objects and shapes: a floating mound as black mass, a berm of land with a steep linear road, a castle-like silhouette and wall, a banner shape like an enormous volleyball net. They seem expansive in their small-scale format. Yet they are condensed and quiet — an internal distillation of that lovely gift of travel to an ancient place.

Like all of my work, this group of four paintings are autobiographical. Until now, I’ve held on to them like entries into my private diary. In 2017, I finally decided to take them out of my youthful handmade frames and have them professionally framed. This year I am finally ready for them, for the first time, to go out into the world.

AETERNA VOLK IS DEAD. She did not pass! She did not fall asleep! She did not go to the great beyond! Aeterna Volk just died. She was never afraid of death, for if you are afraid of dying, you cannot love to live.

Aeterna Volk does not need a memorial or funeral service to convince herself that she truly is dead. The people who have known and loved her will memorialize her in their hearts. Those who never understood her philosophies will not be moved because she has expired.

THIS IS, OF COURSE, the Russian River the casual tourist never sees. He’s in the middle of the damn painting, for one thing. For another, he’s got his eyes closed, soaking up the pure, unreflected heat. He’s too preoccupied, meditating, suspended weightless between water and sky. If he wasn’t on his day off, he’d probably notice the atmosphere is positively luminescent. Pass the Stroh’s, willya?

This is the world as seen by Mary Robertson. “For me, it’s always three in the afternoon, summer,” says Robertson. “No evenings, no mornings.”

Working from photographs, she paints the vacationers and their accoutrements as they float past her vantage point. “It seems to me as though the same swimmers, the same summer people, are always there,” says Robertson, who works with oil on linen and Masonite, not trying to capture the glow of the smogless afternoons but capturing it just the same. This is no small achievement; her work has been compared to Winslow Homer’s, Edward Hopper’s and especially, in its understanding of light, water and timeless human presence, to the Charles River paintings of Thomas Eakins.

“After my first show, somebody pointed that out to me, so I studied him,” says the artist. “It was a little embarrassing, really, for I hadn’t made the connection. To tell you the truth, I just paint what I see.”

The river itself is changing. “Last year,” she says, “They started releasing water upstream. The water is getting clearer. It’s also getting harder to paint. You can see the bottom — it’s like painting gin instead of pea soup. I’m afraid that what Gordon Cook [the painter] said about me is true — that I have a marvelous feel for algae.”

You are currently browsing the Artists category at Art Matters.

Art Matters
Create a free website or blog at WordPress.com.