For two decades he ran the Thomas Reynolds Gallery, an elegant, welcoming art gallery just off Fillmore Street. Since 2015, Thomas Reynolds has exhibited art online and privately by appointment. When a jewel of a space at 1906 Fillmore became available a couple of years ago, he organized a pop-up exhibition. And now, until the end of June, he’s showing art there again.

We met when you were my boss as editor and publisher of California Lawyer magazine. The next thing I knew, you had an art gallery. How did that happen?

I got interested in art and design as a young lawyer in Chicago, going to the Art Institute on Thursday nights. When I came to California Lawyer, we always aimed for strong covers — we even had a Gauguin on the cover once when we wrote about litigation over the bequest that created the Armand Hammer Museum in L.A. I think you edited that story. Through the magazine, I met some wonderful, just-emerging contemporary California painters. Francis Livingston and James Stagg both painted early covers of California Lawyer, and both were in my first gallery show, in 1994.

What made you decide to open a gallery?

I happened into the graduate exhibition of a young painter who lived near Fillmore, Veerakeat Tongpaiboon. His family owned Neecha, the Thai restaurant then at Sutter and Steiner, and many of his paintings were of this area. I lived here, too, and had already fallen in love with the neighborhood. On a lark, I rented the three-room Victorian space at 2291 Pine Street to show Veerakeat’s paintings, and those of a few other artists I admired. I had a six-week lease — it was to be one exhibition, not a new venture.

I loved it — both being surrounded by art and becoming more involved in the neighborhood. And people loved Veerakeat’s paintings. His first three shows sold out and he was able to buy a home nearby, where he still lives and paints. I found a lot of satisfaction in helping launch the careers of some incredibly talented painters who’ve had great success.

END_OF_DOCUMENT_TOKEN_TO_BE_REPLACED

Ken Auster painting on location in San Francisco in 2014.

WE ARE SAD to share the news that the artist Ken Auster died yesterday, January 29, 2016, at his home in Laguna Beach, California. He was 66, and had been battling metastatic prostate cancer for a decade.

Auster burst onto the resurgent California plein-air scene in the mid-1990s and became one of the country’s most respected location painters. Within a few years he had won nearly every major plein-air painting competition and had successive sold-out gallery exhibitions.

“My life in art started when I was a kid,” he wrote in his 2011 book, Intellect and Passion. “I can remember being yelled at for drawing surfers screaming down humongous pen and ink waves at the top of my homework assignments.”

He grew up near the water in Long Beach and surfing was a major part of his life. During his college years at Long Beach State University, he combined his interest in art and surfing and began silkscreening T-shirts. Eventually, after living in Hawaii, he established a successful surf art business and his work was seen around the world.

Despite his success, he decided at mid-career he wanted to be a fine artist.

“A lot of artists start by trying to be painters, then de-evolve into commercial work to make money,” he said. “I started with surf art on T-shirts and worked my way up.”

Painting on location was his breakthrough.

“One day I was invited to go out with a few friends and paint on location at a local beach,” he wrote in his book. “I set up and started painting what I saw. The experience was a turning point in my life. Here was the bare bones of art — no process and minimal equipment, just a burst of passion and paint, with immediate results and gratification. It just happened and it was beautiful.”

Auster’s first exhibition was presented by the Thomas Reynolds Gallery in San Francisco in 1997. It sold out. So did his second and third. His work was widely published, and he went on to exhibit at galleries nationwide. He was also a natural as a teacher, offering workshops around the country and a series of videos.

“Ken Auster was the real deal,” said Reynolds. “He was a terrific painter, a great teacher and a wonderful human being — and he always made it fun, from his clever titles to his endless one-liners that seemed to flow without effort. The world has lost a great artist.”

He is survived by his wife, Paulette Martinson Auster. An aloha style celebration of his life is being planned.

My house is full; I have too much art; I need to downsize. And so, inspired by Marie Kondo’s bestseller, The Life-Changing Magic of Tidying Up, I began to dig around downstairs for art I could sell or donate.

I was looking for an old print I knew was around somewhere, but instead I found a wonderful cat poster I didn’t recognize. One cat was piled on the back of another, from a big lion on the bottom to a perky black house cat on the top. My husband and I are cat people, but we had no idea when or how we had acquired it. Perhaps it was from his mother, an amateur artist who loved cats, or maybe it came from a friend in a library where I worked in the 1970s. We obviously liked and saved it, but it was never framed and has no pinholes from being hung on the wall of our son’s room. What should I do with it?

It was signed Marion Seawell, 1971. Enter the Internet. I quickly found out that Marion Seawell is a California artist and that the Thomas Reynolds Gallery in San Francisco shows her work. So I emailed the gallery:

END_OF_DOCUMENT_TOKEN_TO_BE_REPLACED

It all began when John Seed, the art blogger for the Huffington Post and a Facebook friend, posted his interview with Sandy Ostrau. Her exhibition was at the Thomas Reynolds Gallery in San Francisco and the work captivated me. As a painter, I feel connected with the artists from the Bay Area and am strongly influenced by Richard Diebenkorn’s figurative work. Here was a gallery showing work that I related to.

I became FB friends with the gallery and loved what Thomas posted. Along with posts about work he was exhibiting, he put up interesting articles and photographs. I certainly would have missed the talk Gretchen Diebenkorn gave about her father if he hadn’t posted a link.

When he posted the painting “Inside Move” by Ken Auster in December, I shared it on FB. My cousin Charles in Boston fell in love with the painting, especially because it reminded him of a bar he used to go to in lower Manhattan. He showed it to Jackie, his wife. Charles’ birthday was approaching and Jackie wanted to buy him the painting as a surprise. I encouraged her, she called the gallery, and now they have a beautiful painting by Ken Auster in their living room.

In celebration of its 20th anniversary, we have decided to declare victory and close our gallery at Fillmore & Pine Streets in San Francisco at the end of February.

What began as a six-week exercise in following your bliss has led to the creation of a wonderful community of artists and collectors over two decades. Among the opportunities for which we’re most grateful:

• Working with key figures from the Bay Area Figurative Movement now departed, including Theophilus Brown, Paul Wonner and Henry Villierme, who had a late-in-life resurrection of the art career he put aside 40 years earlier.

We are eternally thankful for your encouragement and appreciation and support — and for the friendships we have made during your visits to the gallery. Many, many of you have acquired terrific paintings you love, and we have watched together as a group of extremely talented artists have pursued their passions and established considerable success.

The TRG website and Art Matters, our online magazine, will continue. We look forward to keeping in touch with you through periodic emailings and posts on our Facebook page.

New adventures await! In addition to ongoing legal and publishing ventures, I am looking forward to pursuing interests and opportunities still to be discovered. To that end, I welcome your suggestions and introductions.

With thanks and all good wishes,
THOMAS R. REYNOLDS

A message from Barcelona 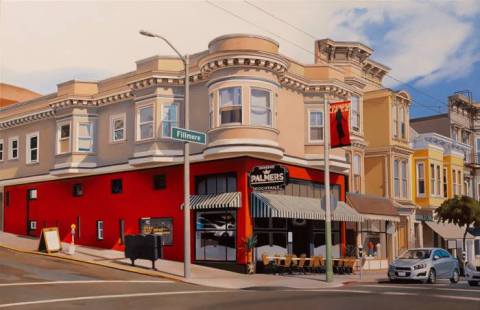 I had the pleasure of meeting you in your gallery this past summer. From that visit to San Francisco was born this painting that I just sold to a customer who, although he is from Barcelona like me, I met through your gallery website.

Painting the energy of the streets

Veerakeat in his home studio | Photograph by Jennifer Blot

The destiny of artist Veerakeat Tongpaiboon had a lot to do with the windows of Academy of Art University’s Sutter Street gallery in downtown San Francisco.

Though he’s now a nationally recognized cityscape painter, the first time he walked by the gallery nearly 25 years ago, he was a waiter and recent emigrant from Thailand. Captivated by the painting of a nude in the window, he set about learning more about the artist, Craig Nelson. When he found out Nelson was director of painting in the School of Fine Art, he decided to enroll at the Academy.

Fast forward a couple of years to an evening when Thomas R. Reynolds, the editor and publisher of a San Francisco legal newspaper, passed by the windows and felt a similar connection to a painting he saw. He entered the gallery, inquired about purchasing two of the works on display and left a business card for the artist, an Academy M.F.A. student who went by one name: “Veerakeat.”

These serendipitous moments happened more than two decades ago, but Veerakeat’s relationship with both Nelson and Reynolds endures — as has his popularity as a San Francisco cityscape artist.
END_OF_DOCUMENT_TOKEN_TO_BE_REPLACED

You are currently browsing the Thomas Reynolds Gallery category at Art Matters.